Trebinje is the southernmost city in Bosnia and Herzegovina situated on the banks of Trebišnjica river in the region of East Herzegovina. The city’s old town quarter dates to the 18th-century Ottoman period, and includes the Arslanagić Bridge.

A city of wine, poets, sunshine and monasteries, and it is said to be one of the most beautiful cities in Bosnia and Herzegovina. The city is economic and cultural center of the region of Eastern Herzegovina.

Trebinje is very proud of its wine cellars with long standing experience in producing different sorts of wine,or tobacco used in the presidential premises all over the world, and healing properties of more than 2000 medicinal herbs.

Throughout the years wine making has become a tradition for many families from Trebinje, so this relatively small area has a great number of wine makers and wine cellars.High quality wine from Lastva called ‘Žilavka’ (sort of varietal wine) is a stamp of this city. As a varietal wine, Žilavka is known for its bright freshness and acidity.

The city lies in the Trebišnjica river valley, at the foot of Leotar, in southeastern Herzegovina, some 30 km (19 mi) by road from Dubrovnik, Croatia, on the Adriatic coast. There are several mills along the river, as well as several bridges, including three in the city of Trebinje itself, as well as a historic Ottoman Arslanagić Bridge nearby.

Trebinje as a continental place, which is so close to the Adriatic sea (Dubrovnik is 25 km far away) has a phenomenal climate. It is the class of continental and mediteranian climate and it is very pleasant for visit. 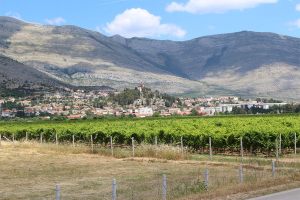 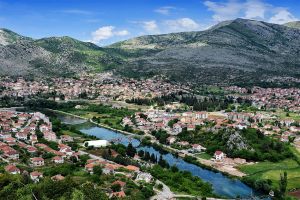 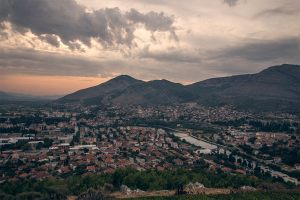 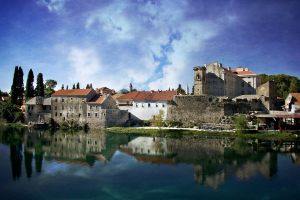 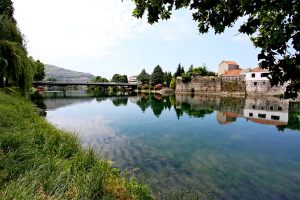 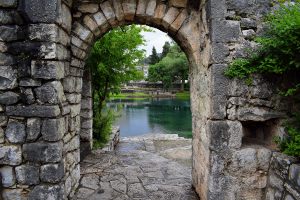 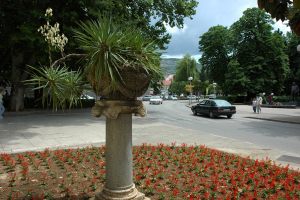 The Hercegovačka Gračanica monastery is a Serbian Orthodox monastery located in Trebinje, in Bosnia and Herzegovina. Largely a copy of the Gračanica monastery in Kosovo, it was completed in 2000. The monastery is located above the city, on the historic Crkvina Hill, and is dedicated to the Virgin Mary. Inside the church there are 16 pillars, out of which 15 are square-shaped and one is round-shaped, carrying special symbolic meaning. In its base there is a stone from Kosovska Gračanica which is a symbol of ‘home cornerstone’, carrying the spirit of ‘old home’ to ‘new home’.

Old town was built on the right bank of Trebišnjica, above the deepest part of the river. Old town Kastel was initially triangle-shaped and it became rounded over time. Its final shape, with all towers, canals, was formed in the first decade of 18th century.

Records about Herzegovinian wines can be found in Middle Ages. The quality of Herzegovinian wines was rewarded with many medals. Throughout the years wine making has become a tradition for many families from Trebinje, so this relatively small area has a great number of wine makers and wine cellars.

On the west side of Trebinje lies ‘The City of Sun’. Until now, eastern part of it was finished, which has capacity up to 5.000 visitors per day. Aqua park, dinosaur park,Sports complex are just a part of this City of Sun.

Tvrdoš Monastery is the seat of the Diocese of Herzegovina and Zahumlje. It is built on the foundations of the tiny church from the 4th century.

Existing in continuity since the Late Antiquity, this monastery testifies that the Christianity has a long-lasting tradition. Anyone who has a chance to visit those two places in the top southern Bosnia & Herzegovina, will be hypnotized by their magnetic loveliness.

Tvrdos Monastery is entirely surrounded with rich vineyards and widely known for its excellent wines, kept in the wine cellar and oak barrel from the 16th century. There are also renewed vineyards planted in the fertile Petrovo and Popovo polje fields. The new wine cellar with tasting room perfectly fits in the monastic environment and greets visitors keen to taste delicious Tvrdos Monastery wines, among which the Vranac wine is widely famous.

There is also a military fortress built in the early 18th century on the bank of the river Trebisnjica, today’s Old Town or «Castel», with its narrow lanes, arches, gates and antique stone buildings, Osman Pasha’s Mosque, the Museum of Herzegovina, numerous cafės and boutiques.Osman Pasha’s Mosque was built of cut stone and covered with a pyramid roof imitating a dome under the eternity. It was built in 1726 as a waqf (endowment) of Osman Pasha. Resulbegovic. Its height is 16 meters and was one of the most beautiful in Herzegovina. It contains elements of the Mediterranean architecture.